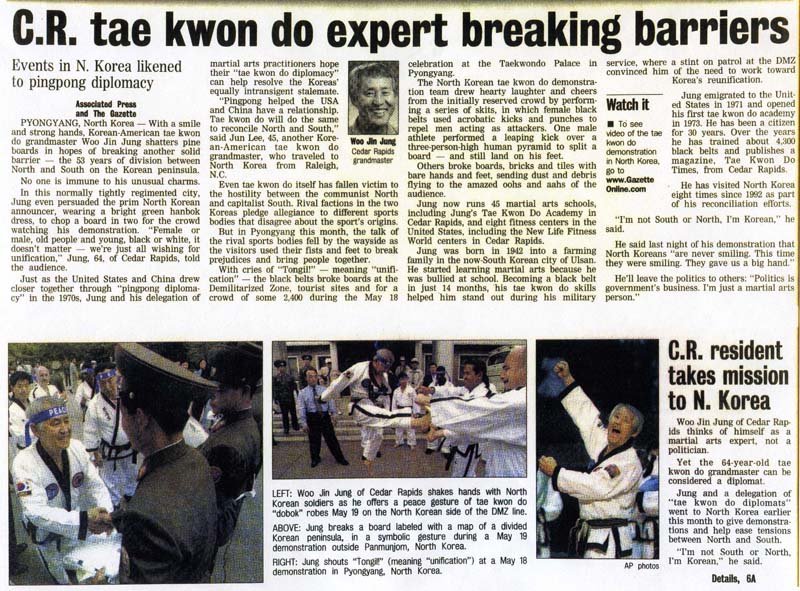 | Events in N. Korea likened to ping pong diplomacy
PYONGYANG, North Korea – with a smile and strong hands, Korean-American tae kwon do grandmaster Woo Jin Jung shatters pine boards in hopes of breaking another solid barrier – the 53 years of division between North and South on the Korean peninsula.

| No one is immune to his unusual charms. In this normally tightly regimented city, Jung even persuaded the prim North Korean announcer, wearing a bright green hanbok dress, to shop a board in two for the crowd watching his demonstration. “Female or male, old people and young, black white, it doesn’t matter – we’re just all wishing for unification,” Jung, 64, of Cedar Rapids, told the audience.
Just as the United States and China drew closer together through “ping pong diplomacy” in the 1970s, Jung and his delegation of martial arts practitioners hope their “tae kwon do diplomacy” can help resolve the Koreas’ equally intransigent stalemate.

| “Ping ping helped the USA and China have a relationship Tae kwon do will do the same to reconcile North and South,” said Jun Lee, 45, another Korean-American tae kwon do grandmaster, who traveled to North Korea from Raleigh, N.C.
Even tae kwon do itself has fallen victim to the hostility between the communist North and capitalist South. Rival factions in the two Koreas pledge allegiance to different sports bodies that disagree about the sport’s origins. But in Pyongyang this month, the talk of the rival sports bodies fell by the wayside as the visitors used their fists and feet to break prejudices and bring people together.

| With cries of “Tongil!” – meaning “unification” – the black belt broke boards at the Demilitarized Zone, tourist sites and for a crowd of some 2,400 during the May 18 celebration at the Taekwondo Palace in Pyongyang.

| The North Korean tae kwon do demonstration team drew hearty laughter and cheers from the initially reserved crowd by performing a series of skits, in which female black belts used acrobatic kicks and punched to repel men acting as attackers. One male athlete performed a leaping kick over a three-person-high human pyramid to spit a board – and still land on his feet. Other broke boards, bricks and tiles with bare hands and feet, sending dust and debris flying to the amazed oohs and aahs of the audience.

| Jung was born in 1942 into a farming family in the now-South Korean city of Ulsan. He started learning marital arts because he was bullied at school. Becoming a black belt in just 14 months, his tae kwon do skills helped him stand out during his military service, where a stint on patrol at the DMZ convinced him of the need to work toward Korea’s reunification.

| Jung emigrated to the United States in 1971 and opened his first tae kwon do academy in 1973. He has been a citizen for 30years. Over the years he has trained about 4,300 black belts and publishes a magazine. Tae Kwon Do Times, from Cedar Rapids.

| He has visited North Korea eight times since 1992 as part of his reconciliation efforts.
“I’m not South or North, I’m Koran,” he said.
He said last night of his demonstration that North Koreans “are never smiling. This time they were smiling. They gave us a big hand.”
He’ll leave the politics to others: “Politics is government’s business. I’m just a martial arts person.”

Historic International Taekwondo Federation Demonstration team from North Korea at Kukkiwon, June 28, 2017. The Goodwill Tours spearheaded by Woojin Jung in 2007 & 2011 for Unification and peace in Korea through TaeKwonDo led to the International Taekwondo Federation returning to South Korea for the first time in 45 years on June 23, 2017. These pioneering events hope to lead to many more bridges of peace and collaboration through Martial Arts and Martial Arts people for many generations to come.