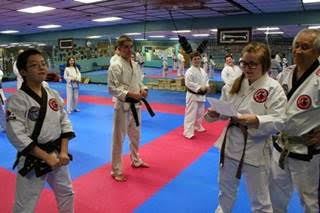 The reason I started Tae Kwon Do was because I was bullied, a lot. All though school I thought that people didn’t like me, and I didn’t know why. Until 5th grade when people started calling me names like, “fat, ugly, slow, mental, and cutter,” the bullies were also telling me to kill myself, because I wasn’t good enough. It made me really sad, and I started self harming in 5th grade and all through 6th. What made me feel even worse was that my sister, Lexi, was with the group that was bullying me. Some days I would just skip school and hide in the bathroom, because I was to afraid what people would say, or do to me. Lexi started telling the whole school things about me that weren’t even true, and pretty soon a rumor went around saying that I was going to commit suicide. I cried for hours, and had to wear a sweater for a month, because I had cut up my arm. When the school year ended, I wanted to try something new, and different, so I chose Tae Kwon Do. I was so happy that I started, then Lexi said, “wow, another thing for you to screw up in and have even more people hate you.” Once she said that, I was crying so much. I thought that Tae Kwon Do was so cool, and it made me forget about anything else that was going on in my messed up life. When school started again, I was still bullied for doing “an Asian sport.” One night I had my knife up to my wrist, because I was so done with life, then the song “Little Things” by One Direction came on the radio. I stopped what I was doing to my skin, and gave Tae Kwon Do another try, even though I was bullied for it. It’s so crazy how one song can change you perspective on life. It may sound silly to you but One Direction kept me going, not only with Tae Kwon Do, but with life. I can’t even explain how much I love Tae Kwon Do. It was my escape from reality when no one liked me. I like don’t even know how to explain myself. You guys are like my second family, and I’m just so glad I’ve met such amazing, understanding people. I never thought that my life could become this great in just months. As my scars fade, my life will get better and better. Thank you so much for all your help, couldn’t have done it without you guys. 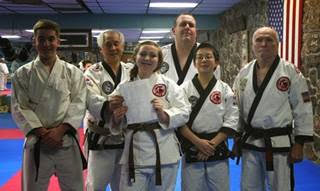