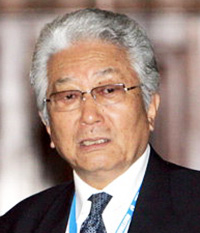 | Chang Ung, a North Korean representative to the International Olympic Committee (IOC), plans to visit South Korea in October to attend inter-Korean taekwondo events, according to foreign reports.
Chang’s scheduled trip is re-igniting controversy over which of the two Koreas has the right to operate the International Taekwondo Federation (ITF).

| Along with the Seoul-based World Taekwondo Federation (WTF), the ITF has served as a key institution in promoting Korea’s traditional martial art globally after it was established in 1966.

| Both Seoul and Pyongyang have run separate ITF headquarters since the death of the South Korean founder, Choi Hong-il, in June 2002.
The Korean-language edition of the Voice of America (VOA) reported that Chang, who is also North Korea’s purported ITF president, will come to Seoul on Oct. 6.

| Chang is scheduled to tour well-known taekwondo sites from Oct. 3 to 8 across the Korean Peninsula, according to the U.S. media outlet.
It said Jung Woo-jin, a Korean-American taekwondo grand master, has been organizing the project with support from other international taekwondo practitioners, mainly those from the U.S, to promote peace on the peninsula.

| The VOA reported Jung drew support from Chang and other taekwondo officials during his visit to Pyongyang in June.
“I think Chang is the right person to facilitate active inter-Korean exchanges in sports and culture, given that he’s a heavyweight in international sports administration,” Jung said.

| Without elaborating the details, the VOA said participants for the various events will gather in Pyongyang on Oct. 3 and join a sports exchange program for four days. They are scheduled to cross the demilitarized zone and arrive in Seoul on Oct. 6.

| They will travel to Taekwondowon, a mega-sized taekwondo complex, in Muju, North Jeolla Province as well as a stele built under the orders of Choi in Seogwipo, Jeju Island, before they leave the country on Oct. 8, according to the VOA. The stele, located at 29th Army Infantry Division, was built in 1953 to show Choi’s passion for the sport during his service there as the division commander.

| The Ministry of Unification, which deals with inter-Korean affairs, denied the VOA’s report.
“They have not asked us, have not consulted with us, and have been making announcements on their project solely on their own,” ministry spokesman Jeong Joon-hee said. A taekwondo practitioner in Seoul also said he will take legal measures against those responsible if the disputed events take place in South Korea.
“That includes unification ministry officials, and I do mean it,” said Oh Chang-jin, claiming he serves as the acting president of the ITF on the South Korean side.

|He claimed North Korea has been claiming the right to operate the ITF after stealing key information from the ITF’s pro-North Korean officials when Choi died. Choi, who helped North Korea join the ITF, died in Pyongyang in June 2002 during his visit there. Since then, Chang has been serving as the ITF chief for the North Korean side. South Korea has operated its ITF office separately under the leadership of Oh.

| According to Oh, the ITF’s South Korean side has over 110 member countries, while its North Korean side has less than 30 members.
The ITF moved its headquarters from Seoul to Toronto, Canada in 1972 when Choi sought political asylum there after having a political conflict with the then-Army general-turned-dictator Park Chung-hee.
This triggered South Korea to launch the WTF in 1973, which now has over 200 member states.