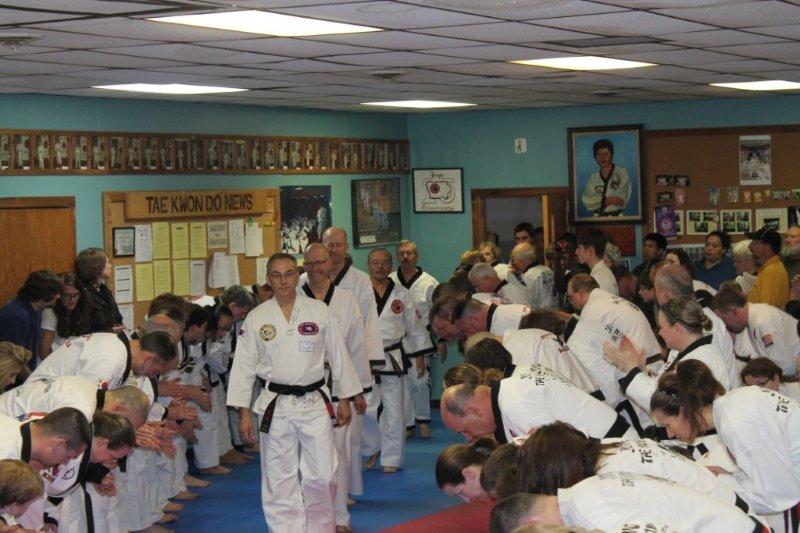 | Living a busy life in this small town Iowa, the land of corns and beans, it has been 40 years already. It may be about time to leave here… With sending some air tickets to whom lived in far distance, I invested my dear 55 of the first and second year pioneer Black belt & Instructors in 70’s and 80’s to one place. It makes me feel sad and lamenting knowing that they are now all 60s, 70s and 80s and half of them are not in good shape with ages.

| Now, all the now black belts bow in 90 degree in two split lines to the pioneer Black belts & Instructors and clapping and greeting them with their warm heart.(Refer the picture) We, the instructor and black belts now including me, are bowing to you all and cried out that “you are the heroes”. At that moment, tears appeared in the old pioneer instructor Woojin Jung’s eyes that he is not supposed to show in front of his disciples at the first time in his life.

| There is some sobbing among the pioneers too. We all got somber for a moment!! I believe it was possible to establish the TaeKownDo culture with these all local Taekwondo pioneers. It is all your dedication that a meager person like me made possible to get chances of operating 11 large health clubs for 35 years, 32 years of publishing TaeKowndo Times magazine, contributing US and N. Korea peace treaty with invitation of N. Korean TaeKowndo peace demo team to US twice and establishing few charity foundations. Now I really appreciate to 5000 black belts who taught Taekwondo about 190,000 people in 40 years so far.

| The current TaeKwonDo disciples are expecting the pioneer instructors would be able to jump over 2 meters during the test. But the old instructor is only pronouncing that all participants of the testing cannot take their feet off no more than 10 centimeters form ground. With that announcement all were perplexed but smiled. In sports, you may be the best but will be a failure if you are not good enough tomorrow. However, martial art is not for techniques but the continuing dedication of the spirit of the martial arts to the next generation. I endowed 7th, 6th and 5th Dan and put the belts around them myself directly with the created Hyung(Pumse, Teul) and prepared essay. All family members and others were exited with taking pictures and elated by the cheering environment. If I could live 7 more years it would be the first time ever in the world who will able to train and make from white belt to 9th Dan in Tae Kwon Do history.

| Many episodes of past memories that I would like to share here… In 1970, when the time of Tae Kwon Do Dojang was just opened, few grandmas came over and asking me “what is today’s special?” with mistakenly identified the newly opened Tae Kwon Do place with Chinese restaurant. Many worried days of “why students are not showing up at all?” during holidays since I have not recognized national holidays of America yet. All the boasting about the TaeKownDo is stronger than Karate with breaking 5 sand blocks with my fore head. Shameful time that I was walking like a stuck up with golf clubs in a luxuries car, counting students number for money, the time that I have been sorted as communist follower by US authority when I was trying to invite North Korean TaeKwonDo demo team to US to dedicate to the divided and TaeKwonDo my home land Korea. Around that time, my favorite saying ‘The dog may bark but the trine will go on’ has been introduced to friends and family.

| TaeKwonDo was able to spread out to the world due to each country pioneer instructors. Now, it is time Korea which is the origin county of TaeKwonDo through a sincere question what the country can do for those TaeKwonDo pioneers rather not treating the pioneers as source of TaeKwonDo tour product. After the special testing session, dinner was served with all the family members of the pioneer black belts in a Banquet form. During the dinner the collected nonprofit organization fund of $100,000, from the part of the testing fee in the past, has been handed over to the Jung’s TKD balk belt foundation president with the condition of the president should fulfilled least 3 years as an instructor and then the annuity will be paid to anyone over 62 till they die. With the past stories of breaking ribs during a free sparing, gossiping on the old instructor’s mistakes, many pictures, slides and movies during the banquet, we all dance together and promised to meet again next year till to finish the party.

| I really hope it is about time Korea, which is origin of TaeKwonDo, will do the same like we did to make the Martial art, Takkwondo, for entire family including adults.